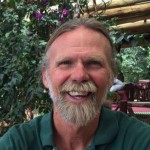 Editor’s note: Steve Wilson is a longtime Tucson cyclist and former Greater Arizona Bicycling Association president. He recently retired from IBM where he commuted by bicycle the last 966 days he went to work.

If you’ve been a regular attendee at GABA’s bi-annual bike swap over the past several years then you know Paul Nosa and his unique bike and solar powered sewing machine.

Paul is an alumnus of the UA where he studied creative writing, French and sculpture. He is working to start a tour to travel to Los Angeles, San Francisco, Seattle, Chicago, Boston, New York and elsewhere to share his work.

In Paul’s own words from his kickstarter project file:

“My name is Paul Nosa, I’m an Artist that draws with a sewing machine. My designs are not pre-drawn nor do I use a computer or template; this is a non-traditional method of using a conventional sewing machine. I am self-taught and have been sewing for the past eight years.

I ask people to think of a scenario in ‘5-words-or-less’, and I sew my interpretation on the spot onto a piece of fabric or ‘patch’.”

He is currently raising money with the intent of touring from May to October of 2012. Click here for more information on his work and purchase one of his pieces to help fund his tour.

One thought on “Tucson’s sewing cyclist raising money for tour”